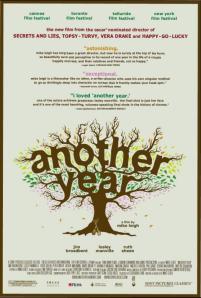 Another Year marks a change of sorts in Mike Leigh’s illustrious and distinctive career. His work has always been based around a wicked and acute sense of social observation that employs an unforgiving gaze to explore the neuroses of families or individuals. At the centre of many of his films is a restless protagonist, angrily flailing against the world. In Another Year – a wry and affectionate character study of a mostly middle-aged group of people– Leigh stands this structure on its head, focusing on a happily married, completely grounded couple who soak up the frustrations and unhappiness of friends and family alike.

Husband and wife Tom and Gerri (perhaps cheekily named after the cartoon characters) lead blissful lives. They are deeply content in their relationship and satisfied with their careers; Tom (Jim Broadbent) is a geological engineer and Gerri (Ruth Sheen) a counselor. They are secure people whose outlet is the small market garden that they tend with loving care, come rain or shine.

Dividing his film into chapters based on the four seasons, Leigh structures his film around a series of encounters that feel almost Rohmerian. Friends and family drop by, occupy centre stage as they unload their problems and then exit, only to have their stories picked up as the film moves into another season. Humour is never far from the surface of any Mike Leigh film, but the mood here is more complex, revolving around Tom and Gerri’s close friend, the fidgety and flighty Mary (Lesley Manville), a beauty past her prime who is still on the hunt for a mate. When her eyes settle on Gerri’s unsuspecting grown-up son, the story twists and turns in surprising odd and directions.

Another Year is a deeply absorbing look at a couple who seem to have gotten it right and a bunch of people who haven’t – and a son that could go either way! Leigh’s grip on the material is unfailingly confident and his actors all deliver highly charged and beautifully shaded performances.

Another Year is a deeply absorbing look at people who have arrived at a point in their lives where happiness has been achieved by some but not by others. –TIFF