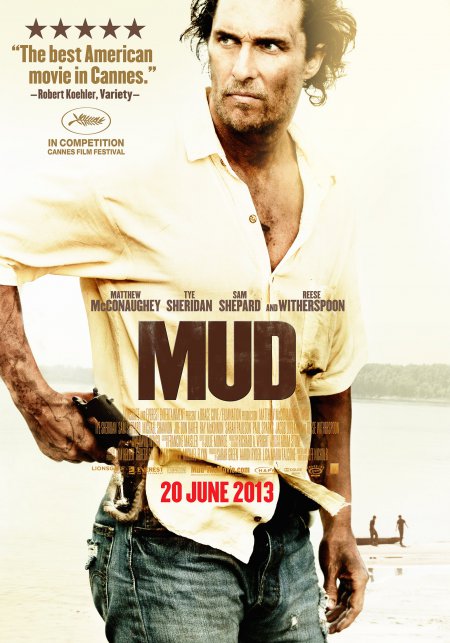 14 year-old Ellis (Tye Sheridan) lives on a makeshift houseboat on the banks of a river in Arkansas with his parents, Mary Lee (Sarah Paulson) and Senior (Ray McKinnon). He sneaks out early one morning to meet his best friend, Neckbone (Jacob Lofland). Neckbone, also 14, lives with his uncle, Galen (Michael Shannon), who makes a hardscrabble living diving for oysters. The two boys set out to an island on the Mississippi River, where Neckbone has discovered an unusual sight-a boat, suspended high in the trees, a remnant of an extreme flood some time in the past. They climb the tree and into the boat only to find fresh bread and fresh footprints. Realizing that they are not the only ones who have discovered the treehouse boat, they decide to leave. When they reach the shore, they find the same footprint in their boat. And that’s when they meet Mud (Matthew McConaughey). Mud is a gritty, superstitious character; his clothes are dirty, his tooth is cracked, and he needs help. He tells the…(Imdb)

Screening right at the end of the festival, Jeff Nichols’s film Mud made an urgent late bid for the Palme d’Or. An atmospheric thriller and coming-of-age tale set on a slow bend in the Mississippi river, Mud has the look and feel of an American indie classic. It is a surefire best picture nominee at next year’s Oscars and likely to win some kind of award at Cannes, receiving the warmest applause of the festival at its morning press screening.

Mud takes its name from its lead character, played by Matthew McConaughey, delivering the best performance of his career (and his second at the festival, after The Paperboy) as a fugitive holed up on an island in the Mississippi after murdering a rival for his lover Juniper (Reese Witherspoon). Mud is wanted by the police and bounty hunters hired by the murdered man’s family. He is discovered, however, by two 14-year-old boys, Ellis and Neckbone, who live in houseboats along one of the river’s swampy tributaries. They fall under Mud’s charismatic spell and are talked into helping him rebuild an old motor boat stranded in a treetop – dumped there, one assumes, years before by a flood or a tornado.

The boys are beautifully played by Tye Sheridan (who starred as one of Brad Pitt’s sons in last year’s Palme d’Or winner, The Tree of Life) and Jacob Lofland. The teenagers’ thrill and adventure in secretly aiding Mud gives the film a Huckleberry Finn-ish flavour that blends with something akin to Rob Reiner’s 1986 classic Stand By Me and Charles Laughton’sThe Night of the Hunter. For such an American film, there are also clear echoes of British classics such as Great Expectations and Whistle Down the Wind.

As the net tightens around Mud, Ellis also becomes a go-between, ferrying messages to Juniper as she takes shelter in a motel. Meanwhile, Ellis is also developing a crush on an older girl from his high school, heading for some harsh lessons about the nature of romance.

Writer-director Nichols, working with cinematographer Adam Stone, succeeds in capturing the life and the geography of his locale, its beauty and its dangers, as venomous snakes crawl in the swirling, brown water and local divers fish for oysters and crabs in their own nets. Mud, which also stars Sam Shepard and Michael Shannon, is a very fine film about innocence, father figures and love, a work that manages to be thrilling, unsentimental and emotionally rewarding. This is, sadly, an all too rare combination in so many films, particularly the other American ones that showed in this year’s Cannes competition, making Mud all the more worth the wait.

A boat in a tree; that’s a hell of a thing. At the beginning of Mud, a Mark Twain-ish coming of age fable written and directed by Jeff Nichols, two 14-year-old boys called Ellis (Tye Sheridan) and Neckbone (Jacob Lofland) discover a flat-bottomed skiff stranded high in a tree, on a small island in the Mississippi delta.

On closer inspection, they find fresh bread and a cache of dirty magazines inside, and realise that it is being used as a treehouse. Its current occupant is Mud (Matthew McConaughey), a wild-haired, chip-toothed stranger whose face and limbs are liberally plastered in his namesake.

Mud spins a story of romance and honour that appeals to the impressionable young Ellis, whose parents’ own rapidly-disintegrating relationship is far from a fairy tale. He is hiding on the island, so he claims, because he is being pursued by bounty hunters and the police after killing a man who attacked his true love, Juniper (Reese Witherspoon). Mud asks the boys to bring him food and equipment that will allow him to bring the boat down from the tree and sail off into the sunset with his sweetheart. Inspired, Ellis agrees to help, but as the boat makes its slow progress from treetops to riverbank and the silty complexities of Mud’s true situation come to light, so the boy’s own idealistic view of love is brought creaking down to earth.

Nichols’ last film, the psychological drama Take Shelter, won the Grand Prix at Critics’ Week at Cannes last year, but this is a broader, more familiar slice of Americana than either that picture or his debut feature Shotgun Stories. This is clearly Nichols’ intention, and there are obvious narrative parallels here with the episode in Twain’s The Adventures Of Huckleberry Finn in which Huck finds the escaped slave Jim on an island on the very same river. But towards the end of the film’s unhurried 130 minute running time, particularly in a rote coda involving both a shootout and a dash to the hospital, the familiarity starts to breed contempt.

Still, there is much to admire here: McConaughey invests the title role with a gravelly drawl and quaggy charisma and both of the youngsters are excellent (Sheridan has only appeared previously in Terrence Malick’s The Tree Of Life, and Lofland is making his screen debut). Nichols also seasons his script with a generous shaking of good ol’, down-home, Southern-fried symbolism, including river pearls, ominous snakes and a sediment-sifting diver played by Michael Shannon, who has become a bit of a talismanic presence for the director. Adam Stone, Nichols’ regular cinematographer, shoots the delta in anamorphic 35mm, and draws out the timeless beauty of the landscape with its hazy light and soil the colour of rust and oxidised copper.