An enigmatic tale of four people whose lives are intertwined by destiny are subject to the laws of fate. They discover that luck is something they cannot afford to be without as they gamble with the highest stakes possible in a deadly game from which only one of them will emerge intact. There is Tomas, a young thief and the sole survivor of a horrific plane crash; Federico, who survived a massive earthquake and discovered he has the power to rob those around him of their good fortune with a touch; Sam, a casino owner who is the ultimate survivor after losing everything but his own life in the terrible conflagration that enveloped Europe during the Second World War; and Sara, a policewoman who walked away from a car crash that killed her family and becomes obsessed with uncovering the truth behind a clandestine gambling ring where death and luck intermingle. (Imdb)

A concentration camp survivor named Samuel Berg (Max von Sydow), a preternaturally lucky fellow, runs a European casino. One of his workers is Federico (Eusebio Poncela), a man who “steals” other people’s luck merely by laying a hand on them. When Samuel Berg has a fall out with Federico and takes away his powers, Federico sets out to find the luckiest man alive (Leonardo Sbaraglia), the lone survivor of a plane crash, in order to use his powers to overpower Samuel Berg in the one game he has never lost: Russian roulette using a revolver, with five of the six chambers loaded. Federico takes his partner through a series of tests in order to confirm his abilities. In the process they approach the tightening circle of underground chance games that will eventually lead them both, and a female cop on their heels, to a final showdown with Samuel Berg.(Mubi)

The seventeen year-old Hallam Foe is a weird teenager that misses his mother, who committed suicide by drowning in a lake near their house in Edinburgh after an overdose of sleeping pills. Hallam spends his spare time peeping at the locals and blames his stepmother Verity Foe, accusing her of killing his mother. After a discussion with his father Julius Foe, Hallam sneaks out from his house and travels to Edinburgh, where he sees Kate Breck and becomes obsessed with her because of her resemblance to his mother. Kate hires Hallam to work in the kitchen of the hotel where she works and they have a strange romance, while Hallam reaches his maturity in the hardest way. (Imdb) 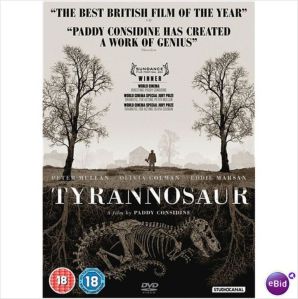 Renowned actor Paddy Considine’s first feature behind the camera is a tour de force propelled by the sheer intensity of its performances and storytelling.

Joseph (Peter Mullan), a tormented, self-destructive man plagued by violence, finds hope of redemption in Hannah (Olivia Colman), a Christian charity-shop worker he meets one day while fleeing an altercation. Initially derisive of her faith and presumed idyllic existence, Joseph nonetheless returns to the shop and soon realizes that Hannah’s life is anything but placid. As a relationship develops, they come to understand the deep pain in each other’s lives.

An unconventional love story, Tyrannosaur transcends its bleak circumstances through Joseph and Hannah’s vigorous impulse toward redemption. Shouldering the weight of burdened lives with great humanity and a deep understanding of our capacity to heal, Mullan and Colman deliver two of the most outstanding performances of the year. Considine’s portrait of these two lost souls, bloody but unbowed, is a devastating and profoundly beautiful experience. –Sundance Film Festival (Mubi)

The story of Joseph, a man plagued by violence and a rage that is driving him to self-destruction. As Joseph’s life spirals into turmoil, a chance at redemption appears in the form of Hannah, a Christian charity shop worker. Their relationship develops to reveal that Hannah is hiding a secret of her own with devastating consequences to both of their lives.(Imdb)

When soldier Captain Colter Stevens wakes up in the body of an unknown man, he discovers he’s part of a mission to find the bomber of a Chicago commuter train. In an assignment unlike any he’s ever known, he learns he’s part of a government experiment called the “Source Code,” a computer program that enables him to cross over into another man’s identity in the last 8 minutes of his life. –SXSW (Mubi)

Colter Stevens, a US Army helicopter pilot whose last memory is flying in Afghanistan, wakes up on a commuter train. However, he discovers that he has assumed the identity of another man. 8 minutes later, the train explodes and Stevens finds himself in some kind of pod. He then talks to someone named Goodwin, who tells him he has to go back and find out who the bomber is. He is sent back to go through the whole thing again and attempts to find who the bomber is but fails. The bomb goes off and Stevens finds himself in the pod again. He is sent back another time, yet still cannot find out anything. When he returns, he asks what is going on. Goodwin and Rutledge, the scientist in charge, tell him that he is part of a project that can put someone in another person’s consciousness during the last 8 minutes of their life. Stevens then asks why he cannot just stop the bomb. He is told that…(Imdb) 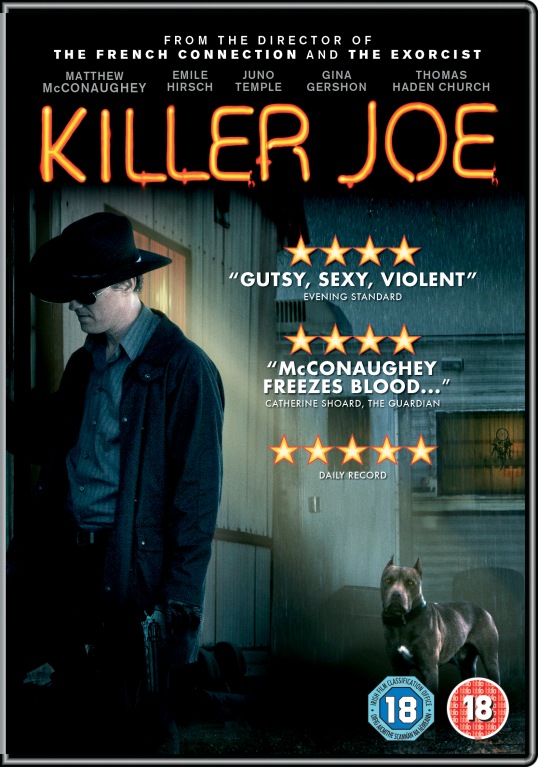 Chris (Emile Hirsch) is broke, desperate and not very bright — a classic dangerous combination. He barges into his father’s trailer with the only plan he can think of: murder. If they kill his mother, they can collect enough insurance money to settle his drug-dealing debts and escape their squalid little life. He even has a man to do the job: a cold, cowboy-styled Dallas detective named Joe Cooper (Matthew McConaughey), who moonlights as an assassin.

But Chris and his father (Thomas Haden Church) can’t come up with the deposit Joe needs to do the deed, so Joe demands a retainer: Chris’ teenaged sister Dottie. Played to perfection by Juno Temple, Dottie is both virginal and vengeful. She eventually accepts her role as Joe’s bounty, but not without exacting her own price. As the plot lunges into more and more brutal territory, her bizarre relationship with the killer takes on a sweet but curdled tang.

Faithfully adapted from Letts’ 1993 debut play, Killer Joe is soaked with lurid, disturbing potential; some scenes go well beyond the bounds of good taste. But that is also its pleasure. In the hands of a master like Friedkin, McConaughey calibrates his performance exactly between seduction and menace. Hirsh, Temple and Church also rise to the challenge of Friedkin’s pulpy, film-noir fun, but it’s Gina Gershon, playing Chris’ volatile stepmom Sharla, who emerges as the heart of this film.

The French Connection and The Exorcist alone are enough to secure Friedkin’s reputation. But he has built a career beyond those seventies classics, probing time and again into the greed and desperation that fuel violence. It should come as no surprise that one of his finest works, Sorcerer, is a remake of Henri-Georges Clouzot’s Wages of Fear. Like that film, Killer Joe is remorseless, right up to its radical final scene. –TIFF

22 year-old Chris Smith is a drug dealer down on his luck, but things are about to go from bad to worse when he hires the charming hit man, Killer Joe, to murder his own mother (who everyone hates) for her $50,000 life insurance policy. With barely a dollar to his name, Chris agrees to offer up his younger sister, Dottie, as sexual collateral in exchange for Joe’s services until he receives the insurance money. Will there be a time when everyone pays the price? Does every life have a price? “Killer Joe is a Cinderella story, but the prince happens to be a hired killer. He’s also a sheriff in the Dallas Police Department,” says William Friedkin, who is better known for his legendary The Exorcist. (Filmekimi)

A novelist struggling with writer’s block finds romance in a most unusual way: by creating a female character he thinks will love him, then willing her into existence.

Calvin is a genius novelist who begins to type a new novel on his manual typewriter about Ruby, his dream girl. He can’t believe his eyes, because the next day, Ruby becomes a real person, and they begin to have a beautiful relationship together. If the relationship isn’t perfect, all Calvin has to do is simply type the words on the page and Ruby’s actions change to what he needs.(Imdb)

What if you could create the perfect partner? What would happen if you accidentally did? From the directing duo of Little Miss Sunshine comes a charming, improbable, and bittersweet exploration of love and relationships –in reality and in fantasy. One of the most anticipated indie films of this year is written and starred by indie star Zoe Kazan and also stars her boyfriend Paul Dano in the lead. Calvin, an unlucky-in-love novelist struggling to follow up his hugely successful debut creates a fictional dream girl, Ruby, to be his muse, but a week later, he finds that she’s sitting on his couch in the flesh. Devotchka frontman Nick Urata composed the score for the film.(Filmekimi)